Researchers are sounding the alarm that a growing number of women are being pushed of the workforce during the Covid-19 pandemic. In September alone, 865,000 women dropped out of the workforce — nearly four times the rate of men, according to data from the Bureau of Labor and Statistics.

McKinsey and Company called it “an emergency for corporate America,” with a separate report finding one in four women were considering downshifting their careers or leaving the workforce entirely.

The healthcare industry is not immune to these stresses. While employment in healthcare increased modestly, the total number of jobs was still down by 1 million since February, according to BLS data.

And for women in healthcare, new data from Doximity show that the pay gap may be widening.

In its annual physician compensation report, the company found that the gender pay gap widened from 25.2% to 28%, with female doctors earning an average of $116,289 less than male doctors.

There were no specialties where women made as much or more than men. 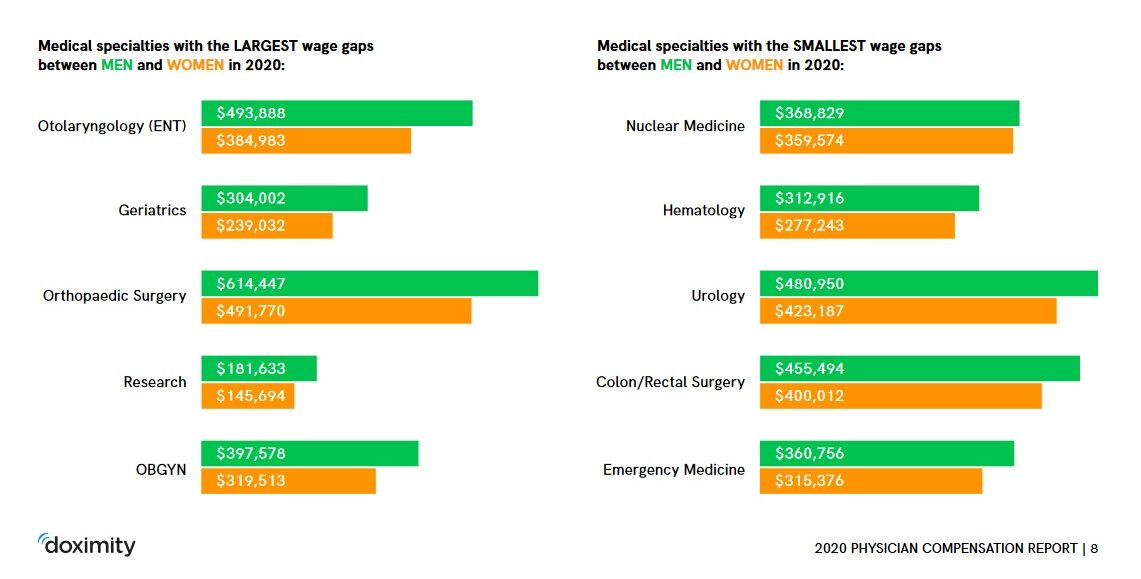 “It’s just a multitude of issues which are making a persistent problem that much harder to rectify,” said Dr. Peter Alperin, vice president at Doximity. “This is a disturbing trend given that there are more women entering the medical field, at least on the physician side, than ever before.”

The Doximity report didn’t delve into the reasons behind the growing pay gap, but the pandemic is expected to be a contributor.

Before the pandemic, working women still spent more time on housework and childcare than their male counterparts — and physicians were no exception. And Covid-19 has brought additional pressures, including grueling work hours and more financial strain on independent practices. Families had to adjust to online schooling, reduced access to childcare, and new challenges in caring for aging parents.

In an article published in JAMA Network earlier this year, Dr. Linda Brubaker, a professor of obstetrics, gynecology and reproductive services at UC San Diego, pointed to systemic assumptions that only widen the pay gap:

“The dogmatic status quo remains in place: long (and perhaps even longer) work hours are necessary, and physicians will need to make personal sacrifices and compromises to meet these demands,” she wrote. “The COVID-19 pandemic has made it easier to see this flawed narrative of life-work balance for medicine. Women physicians do not have trouble balancing competing demands any more than men physicians do. It is simply a more common expectation that women physicians will adjust their professional lives.”