As healthcare costs continue to grow, patients are increasingly footing the bill, according to the Commonwealth Fund’s biennial health insurance survey. Even employer-based plans, considered the “gold standard” of insurance, don’t go as far as they used to a decade ago.

According to the survey of more than 4,200 adults, 26% of respondents with employer-based coverage were underinsured. This is determined by seeing if their out-of-pocket costs (excluding premiums) in the past year equaled 10% or more of their household income. It also applies if their deductible is higher than 5% of their income.

While the numbers were roughly the same as the most recent survey in 2018, it’s a significant increase from 17% in 2010.

Several adults who got coverage through individual market plans, either purchased directly from an insurer or one of the ACA marketplaces, also experienced inflated healthcare costs. 42% were underinsured, compared to 40% last year and 37% in 2010. 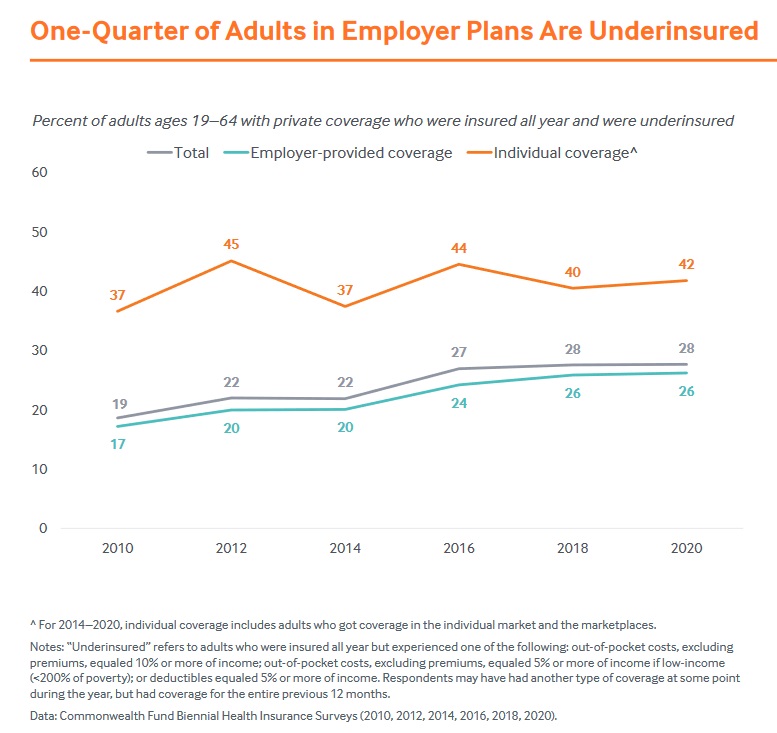 In total, roughly 21.3% of adults were underinsured in 2020, up from 16% in 2010. The Commonwealth Fund largely attributed this increase to “increasingly inadequate coverage in employer health plans.”

One factor might be the rise of high-deductible health plans. The number of privately insured adults with deductibles of more than $1,000 has more than doubled in the last decade. It increased from 22% in 2010 to 46% in 2020, according to the report. For people with employer-based coverage, that number has more than doubled from 6% to 14%.

This has health implications, too. Of all respondents who were underinsured, 43% said they had experienced difficulty accessing care because of cost, which included not filling a prescription, skipping a recommended test or follow-up, not going to the doctor when they had a medical problem, or forgoing needed specialist care.

“The United States entered the pandemic with 30 million uninsured people and more than 40 million underinsured. These numbers are certain to climb this year,” the report noted. “Unless there is a significant drop in premiums and deductibles in private coverage, many households will face health care costs that take up a growing share of shrinking budgets.”

Where to Buy Nonmedical Cloth Face Masks in the UK